Following the murder of a young woman because the Iranian “morality police” objected to the way she wore her hijab, the Canadian government acted under the Immigration and Refugee Protection Act (IRPA) to deny entry to thousands of members of the Iranian regime because of their “engagement in terrorism and systematic and gross violations of human rights”.

“Canada stands with the brave women, students and people of Iran who are peacefully protesting the tragic murder of Mahsa Amini at the hands of the Iranian regime’s so-called ‘morality police’,” the federal government said in a statement. a press release dated October 7. announcement.

The government said “the Iranian regime’s brutal crackdown on these protests – killing, beating and arresting protesters – once again demonstrates its blatant disregard for human rights and human life.” We listen and join our voices to those who demand better.

“First, we will prosecute a list of the Iranian regime, including the leadership of the Islamic Revolutionary Guard Corps (IRGC) under the most powerful provision of IRPA,” he explained. “It is a measure that has only been used in the most serious circumstances against regimes committing war crimes or genocide, such as in Bosnia and Rwanda. This will render the top 50% of the IRGC leadership – the more than 10,000 officers and senior members most responsible for this heinous state behavior – inadmissible to Canada, denying them access to Canadian territory and opportunities,” said the prime minister. “The designation of a plan is a permanent decision. This means that more than 10,000 members of the IRGC leadership, for example, will be inadmissible to Canada forever. »

The Prime Minister added that “we intend to massively expand targeted sanctions under the Special Economic Measures Act to hold to account those most responsible for Iran’s egregious behavior. This tool was not available to previous governments, as it was not until 2017 that we expanded Canada’s sanctions regime to include human rights.

“Third, we are strengthening Canada’s ability to combat money laundering and illicit financial activities, as well as suppress foreign interference in order to protect Canadian Iranians and other communities in Canada,” the Minister said. Prime Minister.

Deputy Prime Minister and Minister of Finance Chrystia Freeland has called the Iranian regime a “state sponsor of terrorism”. 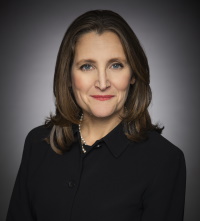 “It’s repressive, theocratic and misogynistic,” she told reporters. “The IRGC leaders are terrorists. The IRGC is a terrorist organization. »

“Today, by listing the IRGC under IRPA and indeed listing the broader leadership of the Iranian regime, we officially acknowledge this fact and act accordingly,” Freeland said. “More than 10,000 senior members of this terrorist organization will be banned from setting foot in Canada. Anyone on this list will be sanctioned and banned from doing business or hiding their assets here. We will strengthen our crackdown on Iranian money laundering in Canada. We will not tolerate financial transactions with Iran associated with the IRGC and its proxies.

Freeland added: “We will use the Magnitsky Actalong with all the other tools in our toolkit, to hold IRGC members accountable for their gross violations of human rights, women’s rights in Iran.

When asked why Canada is not adding Iran to the list of terrorist entities in accordance with the regulations made under the criminal code – as the Conservatives of the official opposition advocate – Trudeau has not ruled out such a decision.

“We looked very, very carefully at all potential tools and we’re not taking any other tools off the table,” he said. “But the reality is, using these provisions that have only been used in cases like Bosnia and Rwanda, to refer to the Iranian regime under these [IRPA] provisions that specifically target terrorism, war crimes, gross and fundamental violations of human rights and genocide, this is the strongest measure we have to prosecute states and state entities,” said he replied. “The Canadian criminal code isn’t the best tool to prosecute states or state entities, but we’ll continue to look at all the tools we can use to do that, but what we’re announcing today goes far beyond what people asked.

When asked why the United States had put Iran on the list of terrorist organizations, but not Canada, Trudeau replied: “The United States has a very different regime than the one we were talking about here in Canada. , and we have spent a lot of time considering exactly what is the best tool we have to hold the Iranian regime to account.”

“Holding states accountable, holding state entities like state military accountable is different from just listing a terrorist organization,” Trudeau added. “And that is why the choice that we have made, and that we are moving forward, is to invoke measures that have not been used since the war crimes in Bosnia or since the genocide in Rwanda, to ensure that there is no doubt that the Iranian regime receives the strongest resistance from Canada possible.

Trudeau said the government is expanding Canada’s ability to fight money laundering and illicit financial activity, as well as crack down on foreign interference to protect Iranian Canadians and other communities in Canada.

To this end, he announced that $76 million has been allocated to strengthen the government’s capacity to implement and enforce the sanctions. “This will ensure that we can move more quickly to freeze and seize the assets of those sanctioned, building on the new powers we introduced in the last budget alone,” he explained. “It will also support the creation of a new sanctions office at Global Affairs Canada and new capabilities at the RCMP. In addition, we are strengthening our ministerial directive on financial transactions associated with the Republic of Iran. We will restrict financial transactions with Iran associated with the IRGC and the proxies that support them. »

As summarized in a press release, the government said it intended:

Bill S-8, a government bill, is awaiting second reading in the House of Commons, following the bill’s passage in the Senate last June. According to its legislative summary, Bill S-8 would amend IRPA to: “reorganize the existing inadmissibility provisions relating to penalties to establish a separate penalty-based inadmissibility ground; broaden the scope of sanctions-based inadmissibility to include not only sanctions imposed on a country, but also those imposed on an entity or person; expand the scope of inadmissibility based on sanctions to include all orders and regulations made under s. 4 of Special Economic Measures Act”; and amending the IRPA Regulations to “among other things, provide that the Minister of Public Safety and Emergency Preparedness, instead of the Immigration Division, shall have the power to issue a removal order on grounds of ‘inadmissibility based on sanctions under new paragraph 35.‍1 (1)‍(a)” of IRPA.

The Liberal government said Canada would also “pursue all tools at its disposal,” including under the Justice for Victims of Corrupt Foreign Officials Act (Sergei Magnitsky Law), which allows restrictive financial and property measures for foreign nationals responsible for flagrant violations of human rights.

The government stressed that Canada continues to work with other countries “to ensure that the Iranian regime is held accountable for its heinous conduct, including the downing of Ukraine International Airlines Flight 752, which killed 138 people en route to Canada, including 55 Canadians and 30 permanent residents.

The government said the new measures build on some of the strongest in the world against the Iranian regime, including the designation of the Iranian state as a pro-terrorist state, as well as the imposition of sanctions last week against senior Iranian officials and prominent entities who directly implement repressive measures, violate human rights and spread Iranian regime propaganda.

“We will continue to use all the tools at our disposal to implement the strongest sanctions in the world against the Iranian regime,” the federal government promised.

If you have information, story ideas or topical advice for The Lawyer’s Daily, please contact Cristin Schmitz at [email protected] or call 613-820-2794.

Neglected, his efforts helped save the country

Mayor of Gunnedah Shire to head Association of Country Mayors

Canada was ranked the 2nd most desirable country in the world